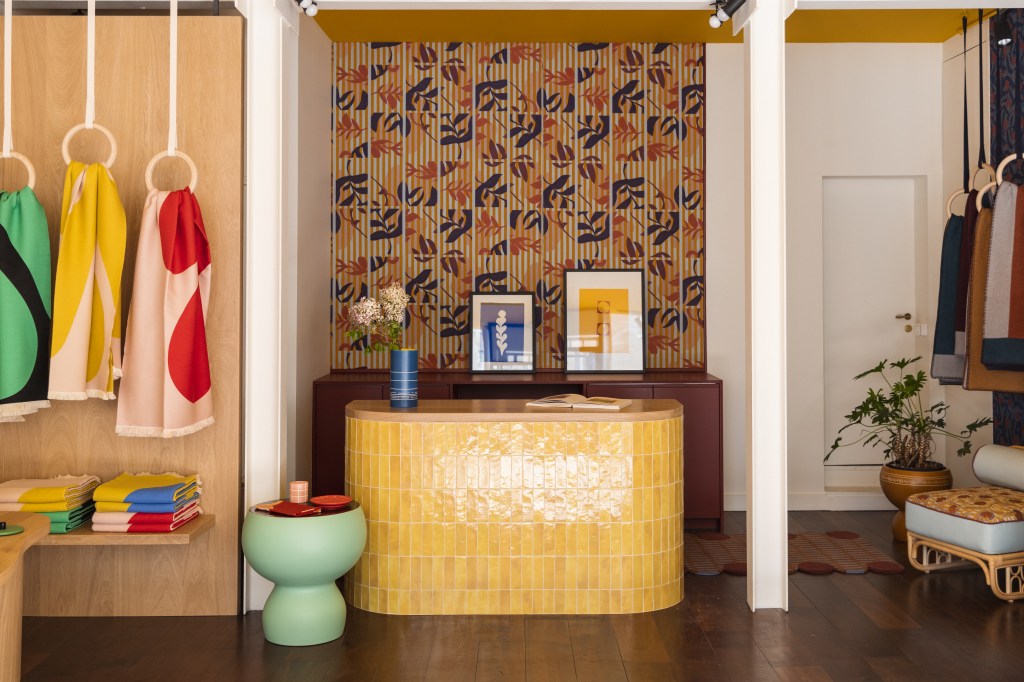 The designers are bottling the enduring appeal of Provence and its artists with creations that tap into the current thirst for colorful and atmospheric interiors, born out of long periods of confinement and travel bans related to COVID-19. And judging by the response online, the appeal of rosé-based parties in cricket-singing gardens has never been stronger.

Sophie Douzal, the founder of the main Parisian communication agency Douzal, took advantage of the forced lull during the coronavirus pandemic to launch her own brand, with the help of Eve Cazzani, a designer who has worked for brands such as than Bonpoint and Petit Bateau.

Le Château de Ma Mère (My Mother’s Castle in English), named after the classic novel by French author Marcel Pagnol, launched its e-shop on April 1, alongside a pop-up store in the trendy Saint -Germain-des-Prés de Paris, which must remain open until June 30.

A stone’s throw from Céline and Saint Laurent, the boutique offers a chic assortment of home and ready-to-wear items in a decor inspired by Douzal’s second home in Saint-Rémy-de-Provence (the old sofa of his grandmother is honored). A summer pop-up should open at the Maison du Village, a boutique hotel in Saint-Rémy, from July 1 to August 30.

“I have a real history with Provence and I spent all my holidays there as a little girl,” explains Douzal, who had long wanted to launch a brand inspired by the region. “During the confinement, I said to myself, it’s now or never.”

She and Cazzani obtained archival documents from the 17th and 18th centuries from an antique dealer specializing in fabrics. The region is renowned for its colorful cotton fabrics made with “Indian” printing boards, originally imported from India to the port of Marseilles in the late 16th century ⁠—but Douzal wanted nothing too cliché.

“The problem with Provence today is that the location is amazing, the light is crazy, the scenery is stunning, but tourism has made it all a bit cheesy. You go to Les Baux-de-Provence, and it’s full of little shops that sell sachets of lavender made in China. It’s a bit of a shame. I had memories of quilted fabrics, of certain colors, so I modestly tried to recreate that,” says -she.

Think placemats in a graphic rope stripe pattern; cushion covers with blue and white flowers; feather-light cotton voile tunic dresses and quilted clutches in traditional paisley and medallion prints. Prices range from 40 euros for a bandana to 450 euros for a quilt, with dresses selling for between 200 and 300 euros.

The textile collection is made in India, while the tableware and glasses are produced in small series by traditional workshops in the south of France specializing in techniques such as jasper pottery.

Henri Matisse’s paintings, with their depictions of ornate Mediterranean interiors, are the inspiration for Maison Matisse, the design house founded by his great-grandson Jean-Mathieu Matisse. The brand recently opened its first boutique on rue du Bac in Paris, in a district dense with decoration boutiques.

Its products are anything but fodder for museum shops. Launched at the FIAC in 2019 with the limited edition creations of design heavyweights Ronan and Erwan Bouroullec, Alessandro Mendini and Jaime Hayon, it now produces two to three permanent collections a year.

“The question was how to maintain this heritage, but in a different way, by being as daring as Matisse was in the art world in his time”, she explains. “He never created objects in themselves, as Picasso did, for example. But objects played a central role in his work, as he collected everyday objects on his travels which he then incorporated into his paintings.

The brand gives carte blanche to designers such as Marta Bakowski and Cristina Celestino to freely reinterpret Matisse paintings such as “La Musique” and “Still Life with Aubergines” in homewares and upholstery.

Produced in Italy, the collection bets on the high end, with prices ranging from 35 euros for scented candles to 960 euros for hand-painted earthenware bottles, rising to 12,800 euros for a screen covered in a rich jacquard fabric.

“We are seeing a growing decorative trend in design after years of minimalism,” notes Di Modica.

While she linked the thirst for color and upbeat patterns to the aftermath of the pandemic, she believes the craze has legs. “When we developed the brand, we didn’t try to capitalize on trends. The idea is rather to create timeless pieces.

Douzal, likewise, hopes his cheerful creations will stand the test of time. “I wanted at all costs to avoid being fashionable. The ambition, which is reflected in the name of the brand, is to create products that are passed on, that can be kept from generation to generation”, she specifies.

The response has been strong in the United States and she hopes to eventually settle there. “I lived in the Hamptons for two years and I know it’s perfect for this client,” she says. “The magic of Provence is everywhere in the world.”