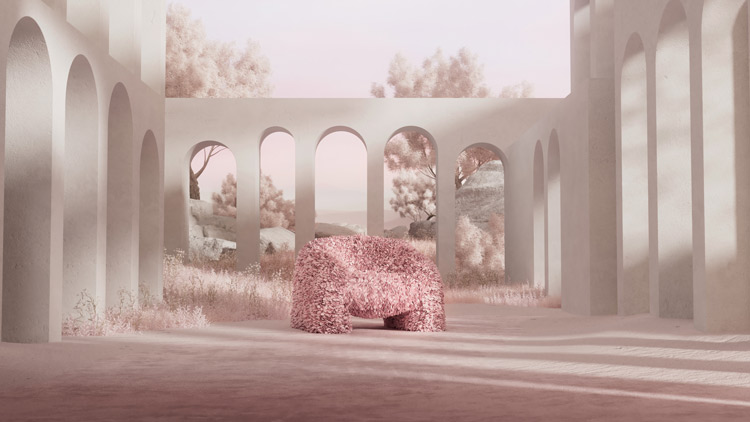 The relationship we have with our homes is special. We organize rooms and rooms to make sure that when we are there, they are spaces of comfort.

It is a process that is also driven by utility. We install upholstery in living rooms and bedrooms, and easy-to-clean surfaces in kitchens and bathrooms. The “inner” spaces of the metaverse are not under any pressure.

Graphic designers have been experimenting with crypto art and non-fungible tokens (NFTs) since they entered the public consciousness last year. Meanwhile, the world is becoming increasingly immersive in digital worlds – or at least that’s what companies like Facebook and Google would have us believe, as they throw their weight behind them. But are there opportunities for furniture and interior designers to work in these spaces?

“The Metaphysical Interpretation of Tangible Reality”


Earlier this year, lighting design and technology company Nemo announced that it was the “first” design company to break into the NFT world. He did it with a collection from Luca Baldocchi, a digital interior designer.

Baldocchi worked with Nemo to reinterpret some of the brand’s iconic physical lighting solutions in a “metaphysical direction”, according to the company. As to why the company wanted to explore this path, Nemo CEO Federico Palazzari said, “The metaphysical interpretation of tangible reality and design products has incredible appeal to the general public, who goes beyond the design community.”

He admits that newcomers to the crypto space will find the appeal “complicated to understand” – not least because of the idea of ​​taking a very tactile skill like furniture making and making it digital. But Palazzari adds that there are plenty of upsides for designers looking to enter.

Beyond the relatively “safe” nature of buying and selling via Blockchain – a kind of digital ledger that secures ownership rights – one particular advantage Palazzari refers to is the incorporation of all materials that enter into a room. Although the buyer is only personally interested in the digital piece, Nemo’s NFTs come with rights to the associated drawings, renderings and sketches, telling the story behind each piece.


Furniture and lighting NFTs don’t need to acquiesce to real-world physics — and Palazzari says Nemo’s NFTs are good examples of that. Since these are maximalist creations, “the creative process, spontaneous and unintentional, mixes various unrelated components, finding a balance,” he says.

Another example is the “impossible” pieces of furniture by designer and digital artist Andrés Reisinger. One of his pieces fetched $70,000 (about £51,000) at auction last year, while the collection as a whole garnered a lot of general attention online. Her Deep Space sofa is a bulbous, mobile lilac piece, while one of her most viral pieces is her Hortensia chair, seemingly constructed with thousands of pink petals.

Reisinger’s work is symbolic of his desire to “play, experiment and explore”. “My designs represent a hybrid reality of physical and digital and I think many perceive them as ‘impossible’ because I work beyond generally accepted boundaries,” he says. “I like to portray moods that seem slightly distorted, slightly strange, surreal if you like but never impossible – I think we need to reconsider what is actually impossible these days.”

While his pieces blur the lines between what’s familiar and what’s not, the way they’re actually “made” doesn’t differ too much from traditional furniture design. Materials and use cases are an important part of the design process, but where a designer in the real world would translate these considerations into physical fabrication, Reisinger moves to 3D modeling software.


Reisinger’s work raises an important question: where do you “put” virtual furniture? The designer and digital artist says his pieces can be placed in any shared 3D virtual space – think Decentraland or Minecraft. Alternatively, they can be used as part of virtual and augmented reality spaces.

As we move further and further into the digital age, Reisinger expects these spaces to become increasingly important. “Our social codes and our codes of life will evolve, as they always have,” he said. “We are moving towards greater involvement, and hopefully trust, in the digital realm.”

Indeed, Reisinger suggests that designers will have an important role to play in earning that trust. “We [need to] learn to love living in a digital sphere, develop a unique way of owning and keeping objects and works of art,” he says. Being able to organize digital spaces the same way we do our homes could help people achieve that comfort.

Decentraland is a good example of how this conversation is going right now. Using the platform, users purchase “land” in the form of NFTs using the MANA cryptocurrency. Then, much like in the real world, users can “decorate” their plot as they please, explore and visit others.

For Reisinger, there is beauty in accepting both spaces as part of the future, for designers and the general public. “We just have to understand that it’s not an ultimate decision between the digital and the physical: the two worlds can coexist and improve,” he says.

“The high value-added link between reality and virtuality”


Although there is a certain natural skepticism in the space – the environmental impact and its simple understanding being the main ones – as more and more people start to organize a personalized online presence, virtual furniture and spaces interiors could become a bigger part of the design. Palazzari emphasizes that “meta-reality must be studied and interpreted”.

“Designers should start approaching new digital assets and exploring the expressive potential of these new languages,” he says, adding that NFTs are first and foremost a “powerful communication tool.”

“The Nemo classics have been inserted into surreal storylines and inevitably acquired a new power of speech – perhaps a conversation can be started about the valuable connection between reality and virtuality.”

Do you think the metaverse will have an impact on furniture and interior design? Let us know what you think in the comments below…